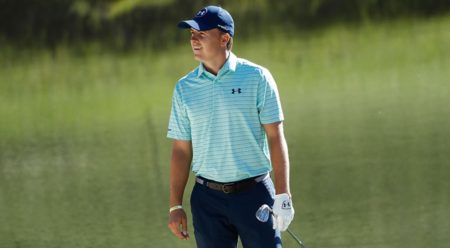 There was no way to stop the ball. That was Jordan Spieth’s assessment of his bunker shot at the par-3 12th hole, his third of the day. From nearly 23 feet, and trying to land the ball on a steep slope, he figured he’d do well just to keep the ball on the green.

Instead he holed the shot for a birdie.

“The last thing I said before I hit it was, ‘The idea is to have the pin stop it,’” Spieth said. “And I hit it and it just landed right in the hole. I’ve never done that before.

“So that was awesome. And I knew that I would immediately take crap from Kis and Justin.” (Spieth played with Kevin Kisner, winner of the DEAN & DELUCA Invitational, and Justin Thomas.) “Justin said he was so flustered he wanted Kis to putt first.”

Then again, Spieth has had to be patient a lot this year. After a pair of top-three finishes in Hawaii and a victory at the AT&T Pebble Beach Pro-Am, he swooned with three missed cuts in five starts. Most painfully, he failed to make it to the weekend at the AT&T Byron Nelson in his hometown of Dallas. He also faded badly on Sunday at the Masters (T11).

Spieth changed putters, and changed back. He was in danger of missing the cut at last week’s DEAN & DELUCA Invitational, but righted his second round to get to the weekend—a turnaround that may wind up being the pivot point of his whole season. His eventual T2 finish moved him up to fifth on this season’s FedExCup points table, and in prime position to go for his second title in three years. (Only Tiger Woods has won the FedExCup more than once.)

Spieth’s eight birdies Thursday at Muirfield Village, where his best result in four starts is a T3 in 2015, was a mere continuation of his recent form.

“As different as it looks, it plays pretty similar to Augusta,” said Spieth, who hit 10 of 14 fairways and 14 greens in regulation, and took 25 putts. “It’s a second-shot golf course where it’s not the toughest off the tee, but playing to certain sides of the fairways have big advantages on angles to the pins. It’s tough to get the ball below the hole.

“Same as Augusta—unless you’re in the right spot where you’re attacking, [you have to] take your medicine if you’re not. And recognize on mid-range [putts], where other courses you can knock in a 15-footer, out here, you have to play defensive. Because these greens are as fast as we see all year. I love that. I love that it’s strategic, and I love that it requires some touch, a lot of touch around the greens and especially on the greens.”

Jason Dufner Has Another 65, Opens Big Lead At Memorial
Scroll to top