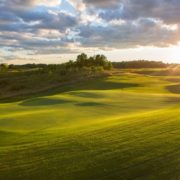 The Nine Most Eagerly Awaited New Golf Courses Of 2017

The bucket list mentality is strong with golfers. Sure, the majority of golf is played locally, but that doesn’t change the fact that the diehards among us can’t wait to hear about the next great course or destination.

The unvarnished truth is that the golf industry continues to go through a period of natural correction, with annual course closures far outweighing openings since the boom years of development over-saturated a lot of markets. What that means, though, is that new courses tend to be something truly special, with great design, terrific location or both. In 2016, for example, we were introduced to remarkable courses such as Mossy Oak in Mississippi, the reversible Loop in Michigan, and Trinity Forest in Dallas.

Below are nine courses opening in 2017 that U.S. golfers should know about, from the Allegheny mountains of rural Pennsylvania to a sprawling, operational cattle ranch in Oregon.

One of the nation’s biggest golf resorts is expanding to 108 holes, with Gull Lake View Golf Club & Resort in Southwest Michigan opening its sixth course (Stoatin Brae) this year. To transform the rolling contours of a former apple orchard high above the Kalamazoo River Valley into a minimalist Scottish-style golf course, ownership turned to the Michigan-based Renaissance Design team managed by Tom Doak. Stoatin Brae means “grand hill” in Scottish Gaelic and the elevation of the property means the ever-changing wind patterns can change not just day-to-day, but hour-to-hour.

Pete Dye keeps plugging along at age 91. On July 12, he’ll open a second course at the luxurious Nemacolin Woodlands Resort in southwestern Pennsylvania, as Shepherd’s Rock joins his celebrated Mystic Rock course that’s ranked among the top 100 public courses in the country. Built on rolling terrain atop the Allegheny Mountains, the front nine is tree-lined and will require precision and accuracy while the back nine is more brawny; wide open with impressive vistas of the Laurel Highlands. In true Dye fashion, there will be rippling fairways, man-made mounds, plenty of wetlands and well-protected greens.

An artist’s rendering of The Summit just outside Las Vegas. (Photo credit: The Summit Club)

The private Summit Club will be the centerpiece of a luxury community (253 homes) in Summerlin, just 15 minutes from the Las Vegas Strip. The 18-hole layout designed by Tom Fazio is set to open in the spring, but will only be available to homeowners who pay upwards of $2 million to live in yet another impressive Discovery Land project. Beyond the spectacular desert golf and the proximity to downtown Vegas, the club’s on-course comfort stations feature treats from a margarita machine and tacos to homemade ice cream sandwiches.

The new Bayou Oaks Golf Course in New Orleans City Park, which is scheduled to open in the spring, replaces 36 holes that were destroyed in Hurricane Katrina in 2005. The new championship-level course, which joins an existing 18-hole layout (The North Course), was designed by architect Rees Jones with aspirations that at some point it could host the PGA Tour’s Zurich Classic. It’s a municipal course designed in the same category as a Bethpage Black or Torrey Pines. Bayou Oaks incorporates portions of the former East and West courses and includes historic oak trees and existing lagoons that are characteristic of the park. Perhaps most significantly, a portion of revenues will go toward helping schools and children in the local community.

Johnny Morris, the founder of Bass Pro Shops, continues to expand his impressive Big Cedar Lodge property with a Gary Player short course that will open this spring. The layout, designed as a more accessible experience for families, juniors and newcomers to the game, is a collection of par-3 and par-4 holes. It joins the eye-popping par-3 Top of The Rock course (Jack Nicklaus design) and the championship Buffalo Ridge course (Tom Fazio) at Big Cedar Lodge. The family-friendly getaway in the Ozarks is also adding an 18-hole Coore/Crenshaw course in 2018.

This is the most unique new golf facility of 2017, with two reversible 18-hole courses built on a property with 27 greens (nine are shared). Silvies Valley Ranch will truly be a one-of-a-kind golf experience, as the Dan Hixson designed Hankins and Craddock courses are part of a 140,000-acre working cattle ranch and resort. The course direction will be reversed each day once it opens in July, and there’s more to come. Later this year, the Western retreat will open a fun 8-hole course of par-3 and par-4 holes carved into a steep-sided, narrow ridge of land (a razorback) that’s called McVeigh’s Gauntlet.

Mike Keiser found a recipe that works, bringing destination golf to the Oregon coast (Bandon Dunes) and Nova Scotia (Cabot Links). In May, Keiser unveils his latest project amid more than 1,700 acres of sand dunes in Central Wisconsin. The first course at Sand Valley, designed by the team of Bill Coore and Ben Crenshaw, brings the big, bold playing style of a seaside links to the nation’s heartland. The layout is routed through meandering ridges and valleys, and a second course by David McLay Kidd is already in the works for the property.

The grow-in process at Streamsong Black, which will be open this autumn. (Photo credit: Nile Young)

The first two courses at Streamsong — Blue and Red — quickly ensconced themselves in Top 100 rankings and now the resort’s highly anticipated third course is set to debut this fall. Built by architect Gil Hanse, the designer of the 2016 Olympic course in Rio de Janeiro, the par-73 Black course is an expansive and strategic layout spread across rolling, sandy terrain that is reminiscent of the Sand Belt of Australia. Streamsong may be located in Florida, but the resort delivers a golf experience like none other you’ll find in the state.

The 17th hole at Dazante Bay is a stunner of a par-3, playing downhill to a peninsula green that sits high above the Sea of Cortez. (Photo credit: Dazante Bay)

Okay, this one isn’t in the U.S., but it’s not that far away either. Dazante Bay, which is located in Loreto on the Baja Peninsula (about a two-hour flight from Los Angeles), opened 11 holes last year and the course is set to have all 18 holes ready for play in fall of 2017. Architect Rees Jones was given a remarkable piece of property and impressively incorporated desert, dunes, mountain, valley and water holes. The most notable is the stunning par-3 17th, which plays downhill to a green perched on a peninsula green 250 feet above the Sea of Cortez. Jones says he believes No. 17 will be considered one of the best holes in the world and it’s hard to argue when you’ve seen the photos.