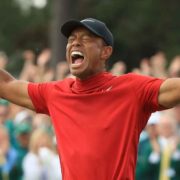 AUGUSTA, Ga. — Before Jack Nicklaus authored the most iconic moment in Masters history, when he charged back from 4 shots down and shot 6-under 30 on the second nine to win his sixth green jacket in 1986, he was considered nothing more than a long shot at age 46.

Nicklaus arrived at Augusta National Golf Club that season having missed the cut in three of seven tournaments and withdrawing from another. He was 160th on the PGA money list. He hadn’t won a major in six years. He hadn’t won the Masters in 11.

While Tiger Woods might be three years younger than Nicklaus was 33 years ago, and while he hasn’t yet reached the same golden age as the Golden Bear in 1986 because of improved technology and the marvels of medicine, what he accomplished in the 83rd edition of the Masters on Sunday is every bit as remarkable.

For the first time in his career, Woods came from behind to win a major championship. He started Sunday’s final round trailing Italy’s Francesco Molinari by 2 shots, and sat 3 behind after 11, but chased the reigning Open champion down with a 2-under 70.

Woods won the Masters for the fifth time — second to only Nicklaus’ six titles — and claimed his 15th major championship, which trails only Nicklaus’ 18.

Woods also became the second-oldest man to win a green jacket at 43 years, 3 months and 15 days. Nicklaus was the oldest Masters champion at 46 years, 2 months and 23 days.

Twenty-two years ago, at the age of 21 and less than a year after he turned pro, Woods became the youngest Masters champion, winning the 1997 tournament by a staggering 12 strokes. He won his second Masters at 25, his third at 26 and his fourth at 29.

Yes, Woods is ranked 12th in the Official World Golf Rankings. Yes, he won the Tour Championship at East Lake in Atlanta in September, was runner-up at the PGA Championship in August and tied for sixth at The Open in July.

Yes, Woods was among the betting favorites this week. He’s always a factor at Augusta National, where the club lengthened half of the holes to “Tiger-proof” the course after his 2001 victory.

In an effort to keep Woods from continuing to dominate the most fabled golf course in the world, Masters officials moved back tees. They added trees to the sides of fairways to make them narrower. They watered greens less to make them firmer and less receptive.

Woods was a very young man in 1997. Now, the most famous golfer in the world is battling time and decline, just like Nicklaus did more than three decades ago.

To truly appreciate what Woods did on Sunday, you have to consider where he was two years ago.

In April 2017, Woods’ career was in jeopardy because of a debilitating back injury. Before Woods arrived at Augusta National to take his seat at the champions dinner, he needed a nerve block to endure sitting in a chair.

Immediately after the dinner, Woods flew to London to meet with specialists, who recommended spinal fusion surgery to alleviate back spasms and pain and discomfort in his leg. He had surgery in Texas later that month, the fourth back surgery of his career.

Some of his problems have been self-inflicted. On May 29, 2017, Woods was arrested on DUI charges near his home in Jupiter Island, Florida. Officers found him asleep in his car. He pleaded guilty to reckless driving and entered a treatment program. That incident followed a very public divorce in 2010 from his wife, Elin Nordegren, which revealed details of his infidelity.

“It was not a fun time,” Woods said earlier this week, after receiving the Ben Hogan Award, given to the comeback player of the year, at the Golf Writers Association of America dinner in Augusta. “It was a tough couple of years there. But I was able to start to walk again. I was able to participate in life.

“I was able to be around my kids again and go to their games and practices and take them to school again. These are all things I couldn’t do for a very long time.”

Woods faced months of rehabilitation and recovery. He didn’t play golf competitively for months. The first time he hit a driver again, it went 90 yards. He was afraid to take a swing. He had to rebuild his game from scratch.

“Golf was not in my near future or even the distant future,” Woods said. “I knew that I was going to be a part of the game, but play the game again, I couldn’t even do that with my son Charlie. I couldn’t even putt in the backyard.”

While others might have wondered whether Nicklaus was finished when he won his last green jacket, even Woods questioned whether his professional career was over.

Now, two years later, Woods is a Masters champion again. The 14-year gap between his 2005 victory at Augusta National and the title on Sunday is the longest in Masters history. Gary Player went 13 years between winning green jackets in 1961 and 1974.

Before Sunday, Woods hadn’t won a major championship since the 2008 U.S. Open at Torrey Pines — a span of 3,954 days. It’s the fifth-longest drought in majors history. He had gone 0-for-28 in majors he had played since then.

Since Woods previously won the Masters in 2005, 55 majors had been played and 35 different players — including 32 first-timers — had won. It seemed that younger players like Molinari, Brooks Koepka, Dustin Johnson, Jordan Spiethand Rory McIlroy had evened the playing field or even surpassed him.

In his younger years, Woods routinely outdrove opponents by 30 or 40 yards. At the Masters, it might not have mattered if he was teeing off from the Kroger parking lot across Washington Road. Compared to Woods, it seemed as if everyone else was playing with hickory shafts.

This week, Woods didn’t even rank among the top 40 players in driving distance. He relied on his course knowledge, iron play and short game to come out on top. He was No. 1 in greens in regulation and ranked in the top 15 in putting.

For four days in Augusta, Woods played like a champion again. And his play resembled the great Masters champions before him.

The question now is whether the most talented golfer in history can become the greatest player in history. Nicklaus never won another major on the PGA Tour after winning the Masters for the final time.

Was Sunday also Woods’ final crowning achievement, or is there more to come?