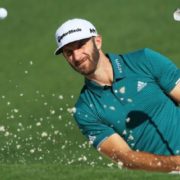 AUGUSTA, Ga. — Dustin Johnson took a serious fall on a staircase Wednesday and injured his lower back, and his manager said it was uncertain whether the world’s No. 1 golfer would be able to play in the Masters.

It was a stunning development on an otherwise quiet day at Augusta National, where the course was shut down at 1:30 p.m. ET because of storms.

Dustin Johnson took what his agent called a “serious fall” down a staircase at his rental home on Wednesday, a day before the Masters is set to begin. Andrew Redington/Getty Images

David Winkle, Johnson’s manager at Hambric Sports, said his client fell on the bare wood stairs at the home he is renting in Augusta. Johnson’s trainer, Joey Diovisalvi, told Masters Radio on SiriusXM on Wednesday night that Johnson was going out to the garage to move a car when he slipped on three wooden steps.

Johnson landed on his lower back and both elbows.

“He landed very hard on his lower back and is now resting, although quite uncomfortably,” Winkle said in an email. “He has been advised to remain immobile and begin a regiment of anti-inflammatory medication and icing, with the hope of being able to play tomorrow.”

Diovisalvi told SiriusXM that they are optimistic Johnson will be able to play Thursday, but first they will have to see how he feels in the morning.

What might help Johnson is that he is in the final group for the opening round, scheduled to tee off at 2:03 p.m. ET with two-time Masters champion Bubba Watson and PGA champion Jimmy Walker.

Johnson was an 11-2 favorite to win the Masters entering Wednesday, according to the Westgate Las Vegas SuperBook. After news of his injury, his odds dropped to 7-1, the same as Jordan Spieth and Rory McIlroy.

Johnson has had his share of mishaps in a major but not before the event even started.

On Tuesday, Winkle described Johnson as being “in as good a shape as I’ve ever seen him in every aspect of his game and his life.”

On Wednesday, Johnson was at Augusta National to play nine holes before the first wave of storms moved in.

Johnson has won three straight tournaments — including a pair of World Golf Championships — heading into the Masters to rise to world No. 1.

He had been scheduled to attend the Golf Writers Association of America annual dinner Wednesday night to accept its award as male player of the year. He was coming off a season in which he won the U.S. Open for his first major, was voted PGA Tour Player of the Year for the first time, won the PGA Tour money title and captured the Vardon Trophy for the lowest adjusted scoring average.

If he is unable to play Thursday, Johnson would be the fourth world No. 1 to miss a major championship, joining McIlroy (2015 Open, ankle), Greg Norman(1988 Open, wrist) and Tiger Woods, who missed the 2014 Masters (back surgery), the 2008 Open (ACL surgery) and the 2008 PGA Championship (ACL surgery).

Winkle said he would not have any further comment until he knows more about Johnson’s condition.

If Johnson cannot play, there are no alternates at the Masters.

Information from ESPN’s Bob Harig and The Associated Press was used in this report.