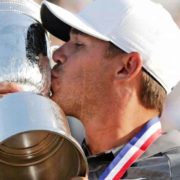 SOUTHAMPTON, N.Y. — History will look at Brooks Koepka and note that he won the same major championship two years in a row. The only similarity in victories between last year and this year is that the name of the courses had the word “Hills” in it. Because, in truth, the U.S. Open he won at Erin Hills a year ago and the one he locked up Sunday at Shinnecock Hills could have not have been more different.

At lush Erin Hills, he took home the trophy after shooting 16 under par over four days in Wisconsin. This time, on a fast and hard Shinnecock Hills course that drew the ire of players this past week, he posted 1 over for the tournament.

How did we end up here, with Koepka becoming the first player to win consecutive U.S. Opens since Curtis Strange did it in 1988 and 1989? We go through all the key moments of Sunday’s final round.

The hole that won the U.S. Open

Koepka made five birdies, but it might have been the par at 14 that lifted him to his second consecutive U.S. Open. Fitting, really, that it was a par at a U.S. Open in which pars were so tough to get. The player with a bad left wrist, playing in the event that most puts that wrist in danger — at a U.S. Open with high, thick, punishing rough — needed to navigate that rough to get home with a pivotal par at 14.

He pounded his tee shot 340 yards, but it found that unforgiving rough up the right side. He advanced it as far as he could, hacking it out 98 yards. With that, he had to get up and down from 62 yards to keep his one-shot lead. His wedge settled 8 feet from the hole. He walked in the putt and kept a lead he wouldn’t give up.

The 63 that wasn’t good enough

“Looking at the pins, you knew they were going to be more accessible,” Fleetwood said immediately after his round. “I knew I was kind of in it teeing off, but you still have to get off to that good start. [When I was] 4 under through seven, and it was game on.”

Still, he would have liked to have back the putt that just slid by on the final hole.

Final-Round 63s At A Major That Didn’t Win

The Grand Slam conversation that wasn’t

Patrick Reed doesn’t lack confidence. He wanted to make a statement, and he did that early. Reed birdied his first three holes, five of his first eight, and went out in 4-under 31. The murmurs started: Maybe Reed could follow his Masters win with a triumph at the U.S. Open. Only seven times a player has opened a calendar year by the winning the season’s first two majors. The last time it happened was when Jordan Spieth won at Augusta and then picked up the U.S. Open at Chambers Bay in 2015.

Reed, though, couldn’t keep up the momentum after bogeys at 9, 11 and 12. A missed short par putt at 18 officially ended his hope of the major double.

The quest for a major comeback

In 1975, Lou Graham won the U.S. Open after trailing by 11 shots at the 36-hole mark. Tony Finau and Daniel Berger faced the same scenario. It appeared early they wouldn’t be joining Graham. Finau strung together three consecutive bogeys at Nos. 2, 3 and 4. Berger had back-to-back bogeys at the second and third. They each tried to rally — Finau made four birdies in a seven-hole stretch in the middle of his round, while Berger opened his back nine with a birdie at 10 — but they could not make the long road back from 11 down.

The USGA changed the place

“In preparation for [Sunday’s] forecasted dry and windy conditions and to maintain a challenging yet fair U.S. Open test, we applied appropriate levels of water to all putting greens last night and this morning for turf health and firmness,” the USGA said in a statement. “Similar to the preparation we took for Round 1, green speeds will be, on average, 10-12 inches slower than Rounds 2 and 3. We also adjusted some hole locations in a manner similar to what we did in Round 1, reviewing our initial selections and comparing them against our weather forecast and other agronomic data.”

Our translation: We messed up Saturday. We are going to make up for it. The place is going to play easier. Did it ever. Not only did Fleetwood shoot 63, but the whole field had a better day. The course played nearly a shot easier on average than it did on any other day this past week.