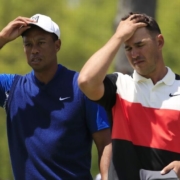 Major questions about Tiger Woods, Brooks Koepka and more with Masters one month away

It’s hard to believe it has nearly been 365 days since Tiger Woods stunned the golf world by winning his fifth green jacket at the Masters.

The 84th edition of the Masters, the first major championship of the PGA Tour season, is only one month away.

There’s much uncertainty, starting with the defending champion. Woods’ aching back, which was a question mark a year ago, is once again a concern. So is Brooks Koepka’s game after knee surgery, and the uncertainty surrounding the coronavirus outbreak.

Here’s everything you need to know 30 days from the 2020 Masters:

The Masters is only one month away, and defending champion Tiger Woodshasn’t played competitive golf in nearly as long.

Woods, 44, will skip the Players Championship this week after missing the WGC-Mexico Championship and Arnold Palmer Invitational, as well. He complained of back stiffness in mid-February at the Genesis Invitational in Los Angeles, where he finished last among players who made the cut.

His agent, Mark Steinberg, told ESPN in a text message on Friday that Woods’ back is “not concerning long term, just not ready.”

In a Twitter post on Friday, Woods wrote: “I have to listen to my body and properly rest when needed. My back is simply just not ready for play next week. I’m sad to miss one of the best events of the season, OUR championship.”

So what’s next for the 15-time majors champion? Even if his back is ready, will his game be ready if he can’t play in the upcoming Valspar Championship or WGC-Dell Technologies Match Play Championship?

It’s hard to imagine Woods not being back at Augusta National on April 9-12 to defend his Masters title. A year ago, he captivated the world when he came from behind to win there, after waiting 14 years to win his fifth green jacket. He became the second-oldest man to win the Masters, at 43 years, 3 months and 15 days old.

Another win at Augusta this year would tie him with Jack Nicklaus for the most Masters victories with six.

“It’s been incredible for myself and my family to be a part of this and for me to be the current Masters champion,” Woods told reporters in a teleconference last month. “It’s crazy that somehow it all came together for one week, one magical week.”

As magical as those 72 holes were a year ago, golf fans were also left wondering whether Sunday at Augusta in 2019 was a fitting end and the final crowning achievement to golf’s most legendary career.

After four back surgeries and another knee surgery in August, would Woods’ body allow him to continue contending at major championships? After winning the Masters, he missed cuts at the PGA Championship and Open Championship and withdrew from the Northern Trust.

After his fourth knee surgery, he unexpectedly won the Zozo Championship in Japan in October and went 3-0 at the Presidents Cup in December. He tied for ninth at the Farmers Insurance Open in his first event of 2020, and everything seemed fine until he suffered back stiffness at the Genesis.

While downplaying the injury at the Genesis, Woods said his plan was “to peak around Augusta time.”

Augusta time is almost here, and there are still plenty of questions when it comes to Woods.

Can Brooks Koepka find his game?

Woods isn’t the only golfer with big questions only a month from the Masters. Koepka, who only a year ago became the first player to hold back-to-back titles in two majors (PGA Championship and U.S. Open) simultaneously, all of the sudden can’t crack the top 40 at a tournament.

This past weekend, he carded a career-worst 9-over 81 in the third round of the Arnold Palmer Invitational (followed by a 71 on Sunday). He finished 9 over, good for a tie for 47th.

Koepka said he feels better about his putting, but his swing is still too inconsistent.

Koepka, 29, plans to play five straight weeks, with upcoming starts at the Players Championship, Valspar Championship and WGC-Dell Technologies Match Play, before taking a week off before the Masters.

“To tell you the truth, I mean, I would never play more than three weeks in a row,” Koepka said. “But, obviously, sometimes things happen, and the only way I see getting through this is playing. That’s my way of trying to grind and work it out and figure it out.

“I mean, every year we have come — I don’t know how far back, to 2016 — all the way through the Match Play has been terrible. So I don’t know what it is about these first three months of the year, but I struggle quite a bit.”

Could you imagine a Masters without thousands of patrons surrounding the greens and lining the fairways of Augusta National Golf Club?

Hopefully, it won’t come to that, but Augusta National officials are monitoring the coronavirus outbreak and consulting the World Health Organization, Centers for Disease Control, Georgia Department of Public Health and other local authorities.

In a memo released by Augusta National chairman Fred Ridley last week, the club said the “safety, health and well-being of everyone is our top priority.”

“As a result of this collaboration, and based upon our knowledge of the situation at this time, we are proceeding as scheduled for the Augusta National Women’s Amateur, the Drive, Chip and Putt National Finals and the Masters Tournament,” the letter said. “We will continue to review the available facts and information with the experts and authorities, establish precautions and take appropriate action to ensure the safety of all involved.”

The Augusta National Women’s Amateur is scheduled for April 1-4, and the Drive, Chip and Putt National Finals are set for April 5.

For the first time in a long time, Tiger Woods looking forward to Masters week

AUGUSTA, Ga. — Tiger Woods was not on the grounds at Augusta National on Sunday, choosing to spend at least the early part of Easter at home before venturing north from Florida to a place he feared might never again be part of his competitive future.

Woods was here a little over a week ago to get a feel for the venue where he has four Masters Tournament victories, playing Augusta National for the first time since 2015, when he tied for 17th.

Each of the past two years, Woods, 42, came to the home of the year’s first major championship to take part in the Tuesday night champions dinner at the club, a bittersweet experience to say the least.

In both instances, the back issues that plagued him for a good part of the past four years prevented him from playing, and being on site made the pain even more acute.

“Brutal; it’s one of my favorite tournaments,” Woods said during a recent interview with ESPN.com. “To go and know that I can’t tee it up … it was harder than you might think. Way harder. When I got on the grounds, looking out there, knowing how to play the golf course, seeing the conditions, seeing the guys play … that was tough.”

Woods will be among the betting favorites when the Masters begins Thursday after a successful return to competition following 10 months away because of spinal fusion surgery on April 19, 2017.

In five tournaments on the PGA Tour, Woods has made four cuts, including a tie for second at the Valspar Championship and a tie for fifth at the Arnold Palmer Invitational, ramping up the hype even more.

That’s a long way removed from the past two Masters, when Woods in each case had made an effort to prepare for and play in the tournament, only to send along his regrets just days before tournament week.

“Of course, I’m always going to try,” Woods said when asked how seriously he considered playing the past two years. “But I really had a hard time walking. I knew I couldn’t swing, couldn’t play. And that made it even harder being there. If I wasn’t there, it’s a lot easier. But when I step foot on the property, knowing all the good memories and all the things I’ve done in the past on the golf course, it’s harder.”

Woods said the mood was somber two years ago as he realized that Arnold Palmer was in poor health. Wood and Palmer each won the Masters four times, trailing only Jack Nicklaus, who donned the green jacket six times.

Helping Palmer get seated at the dinner that night, Woods said, was worse than his own troubles. Palmer was unable to participate in the honorary starter ceremony the next morning with Nicklaus and Gary Player; Palmer died less than six months later.

Woods’ outlook was dire a year ago for a different reason. He wondered if he’d ever play again. At the time, he was just a few weeks away from having the spinal fusion surgery that required he go six months without swinging a club.

Nobody, most of all Woods, knew how he would emerge. Even as he was about to start swinging a club again, Woods said on Sept. 27, “I don’t know what my future holds for me.”

“There were plenty of dark thoughts,” Woods said. “Because I really couldn’t do it. That’s what makes this year so exciting. I’ve got a chance to really do some good playing. That hasn’t been the case for years.”

Woods visited Augusta National on March 22- 23, playing practice rounds each day, according to a post on his website. He had said following the Arnold Palmer Invitational that he would spend considerable time charting the greens and learning the course again.

As has been his custom, Woods used a local caddie named Jay Thacker — Augusta National requires one of its caddies to be employed during non-tournament weeks — and took his time making his way around the course.

His pre-tournament preparation has varied over the years. Woods said he has never played Augusta National — as would be his privilege as a past champion — other than in the weeks leading up to the tournament to get a feel for any changes made.

For several years, Woods made a habit of playing a Sunday practice round at Augusta National, when no spectators are around and just a handful of tournament participants and members are on the course.

But he didn’t do so the last time he played (in 2015), showing up on Monday — having taken the previous nine weeks off to address short-game issues — and then, surprisingly, tying for 17th. And he elected to skip Sunday this year, too.

No matter. Few know the golf course as well as Woods, who last won here in 2005 but has seven top-six finishes in his past nine starts. He also arrives healthy for the first time since 2013, when he tied for fourth.

That is why there is so much optimism, especially from Woods.

“Quite a shift,” Woods said on his website. “Six months ago, the odds were I wasn’t even going to play. I’ve been better with each week I’ve competed. A little more crisp. I’m starting to put the pieces together.”