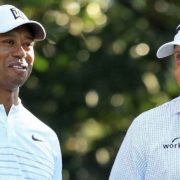 PHILADELPHIA — Tiger Woods was one of three golfers named as at-large picks to the U.S. Ryder Cup team by captain Jim Furyk on Tuesday and later this month will make his eighth appearance in the event, but his first since 2012.

Although the at-large pick was expected, it was still the culmination of a remarkable and unlikely run that didn’t seem possible when Furyk named Woods to be one of his vice captains in January.

At the time, Woods, 42, was ranked 656th in the world and had not earned a single Ryder Cup point. He had not played competitive golf in a year, the result of his fourth back surgery.

“Deep down, I wanted to make the team. I really wanted to play on it,” Woods said Tuesday at a news conference where Phil Mickelson and Bryson DeChambeau were also added to the U.S. team. “Now I had not started playing golf really yet, but still … it was a goal.

“… As the year progressed, I’ve kind of gained some traction and was somehow able to get some high finishes. And lo and behold, I’m a part of this team. It’s incredible, it really is, to look back at the start of the year and now to have accomplished a goal like that, to be a part of this team, and now to be a player is just — like I said, it’s beyond special.”

Woods, who has five top-10 finishes this year, including a runner-up at the PGA Championship three weeks ago, ended up 11th in the final Ryder Cup standings, with the top eight players after the PGA earning automatic picks.

Furyk will add a final pick Monday following the BMW Championship at Aronimink Golf Club. Tony Finau is considered the leading candidate. Others who might still be considered are Kevin Kisner, Xander Schauffele and Patrick Cantlay.

Mickelson, 48, will be making his 12th straight Ryder Cup appearance.

“It’s obvious that the one thing that has been missing is for our team to go over to Europe and win,” said Mickelson, who has played on three winning U.S. teams — but never overseas. “I’m very excited about the team this year. I’m excited to be a part of this team. We have some incredible players, great leadership and a really special opportunity to do something that we haven’t done in a long time.

“It’s going to be a great challenge because we know how strong the European side is and how well they play at home. But it’s a wonderful chance, an opportunity for us to do something I haven’t done or been a part of in my career, and would very much like to.”

DeChambeau finished ninth in the final standings and was considered a strong possibility for a pick before winning the first two FedEx Cup playoff events. He is a former U.S. Amateur champion and has already developed a bond with Woods, looking to speculation about a possible pairing in France.

Love captained the U.S. team to victory in 2016, and Stricker was the winning U.S. Presidents Cup team captain last year.