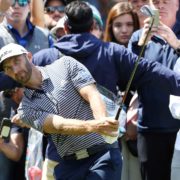 Johnson had a big lead heading into the final round, but his Sunday at Chapultepec Golf Club in Mexico City was drama-free.

Dustin Johnson had a big lead heading into the final round of the World Golf Championships-Mexico Championship, but his Sunday at Chapultepec Golf Club in Mexico City was drama-free. Here’s what you missed.

How it happened: This one was never in doubt. Johnson led Rory McIlroy by four after 54 holes and made the turn on Sunday leading McIlroy and Paul Casey by five. The back nine was nothing more than a victory parade to the clubhouse. Johnson, 34, made birdies on 10, 11, 14, 15 and 16 to sign for a 66. McIlroy, who made six back-nine birdies, was second at 16 under, five back of Johnson. The three players who tied for third were five back of McIlroy.

Key hole: The lead was still four when McIlroy and Johnson reached the par-5 6th. They both found tree trouble, although Johnson was awarded a free drop while McIlroy wasn’t. Johnson made birdie and McIlroy made bogey, which increased the lead to six.

Why it matters: It’s Johnson sixth career WGC victory, and he’s second to only Tiger Woods’s 18. Phil Mickelson and Geoff Ogilvy are tied for third with three WGC titles. The victory was also DJ’s 20th of his PGA Tour career, which gives him lifetime member status.

Best round: Justin Thomas made nine birdies in his first 12 holes (to one bogey) and shot a nine-under 62. He missed a 14-footer for birdie on the final green that would have broken his own course record.

As for Tiger?: He closed with a two-under 69 and tied for 10th. He’s now off for a week until he plays back-to-back at Bay Hill and The Players.

Up next: Thomas defends his title at The Honda Classic at PGA National in Palm Beach Gardens, Fla. Rickie Fowler and Brooks Koepka also headline the field. Woods tweeted earlier this week he would not be playing, despite the proximity to his home.