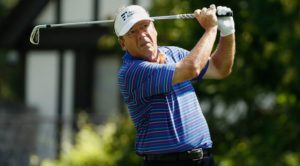 UPPER ARLINGTON, Ohio — Joey Sindelar, one of four former Ohio State players in the U.S. Senior Open at Scioto Country Club in suburban Columbus, has felt the support of the hometown crowd all week.

It apparently was a big help Friday. The 58-year-old Sindelar shot a 4-under 66 on a hot and humid day to take the second-round lead. He had five birdies, including two in a row after a bogey on No. 5. After finishing the first round with a 69, he was at 5 under overall.

“I’ve never been unconvinced that that many people in your corner, as the four of us have witnessed this week, cannot somehow kind of talk you into what might happen,” Sindelar said.

His highlight was a 40-foot birdie putt on the par-3 17th, after pars on the six previous holes.

“I’m seeing the line very well, and I seem to be able to hit the ball where I’m looking, and so far it’s been a fun week with the putter,” said Sindelar, whose best finish in a senior event was a second in 2009.

Billy Mayfair, making his first PGA TOUR Champions start after turning 50 last Saturday, was a stroke back after a 67. He had four birdies and a bogey.

First-round leader Vijay Singh followed his opening 66 with a 75 to drop into a tie for eighth at 1 over.

“I didn’t hit that many fairways,” Singh said. “It was a lot windier today. I got some bad breaks, didn’t putt as well. But all in all, I managed. I didn’t play as bad as what the score reads.”

Defending champion Jeff Maggert also was 1 over after a 71. He won last year at Del Paso in California.

Sindelar said stamina has been factor for the PGA TOUR Champions players in the blistering heat and high humidity. For one thing, Sindelar said he also had trouble keeping his hands dry on the club. The conditions also have worked in their favor, with the course playing hard and fast.

“Some of us have aged way different than others,” he said. “I’m extremely arthritic so the heat is good for me. It keeps me loose so I’m kind of enjoying it. But, boy, at night we’re cramping no matter how much you drink. Everybody got beat down a little. It’s just tough physically to go through that out there.”

John Daly had an 81 to miss the cut. He had three double bogeys, six bogeys and a birdie.

Because of the threat of rain Saturday, the players will play in threesomes starting at about 7:30 a.m.

• Is competing in his ninth U.S. Senior Open with his best finish a second-place effort at the 2009 event at Crooked Stick GC in Indiana. Was also T4 in 2011.

• This marks the first time he has held sole possession of a second-round lead in a PGA TOUR Champions event since March, 2009 when he led Don Pooley by one stroke at the AT&T Champions Classic in Valencia, Calif. He eventually finished T4.

• Claimed seven victories on the PGA TOUR with the last coming at the 2004 Wachovia Championship in Charlotte.

• Played his college golf here in Columbus at Ohio State where he was a three-time All-American and a member of the Buckeyes’ 1979 NCAA Championship team.

• Son, Jamie, is working as his caddy this week. He, too, played golf at Ohio State.

• Two players who enjoyed big turnarounds on Friday were Peter Fowler and Duffy Waldorf. Each improved their scores by 10 strokes over Thursday’s opening rounds. Fowler shot a 3-under-par 67, while Waldorf finished at 2-under-par 68. Fowler shared the 36-hole lead in Sacramento a year ago. In addition, Joe Durant, coming off a win at last week’s 3M Championship, rebounded from an opening-round 75 with a 3-under-par 67.

• A day after shooting a 4-under-par 66 in his opening round, Vijay Singh shot a 5-over-par 75 on Friday and is currently T8 where he is joined with defending champion Jeff Maggert and 2011 U.S. Senior Open champion Olin Browne.

• Bernhard Langer rebounded from his 3-over-par 73 on Thursday with an even-par 70 and finds himself T22 heading into the weekend. He trails by eight strokes as he seeks his third major title in 2016 and eighth overall which would tie Jack Nicklaus in that category on PGA TOUR Champions. Langer also has a streak of 15 consecutive top-10 finishes in majors dating back to 2013.

• The only amateur among the 23 amateur entrants to make the cut was Chip Lutz, who posted a 36-hole score of 6-over-par 146. It marked the 12th consecutive year at least one amateur had made the 36-hole cut. Lutz won the 2015 U.S. Senior Amateur title to earn a berth in the field.

• Brandt Jobe, who already owns three top-5 finishes in major championships this year on PGA TOUR Champions, is back in the top 10 after two rounds. His even-par 70 on Friday helped him to his current T10 position. He was T3 at the Senior PGA Championship, fourth at the Constellation SENIOR PLAYERS Championship and T5 at the recent Senior Open Championship. He was the medalist at last fall’s PGA TOUR Champions National Qualifying Tournament in Scottsdale.

• Mark Wiebe and Mike Gilmore each withdrew on Friday. Wiebe withdrew after eight holes, while Gilmore did not start his round.

Going into Final Round, Who will win Men’s Olympic Gold?
Scroll to top