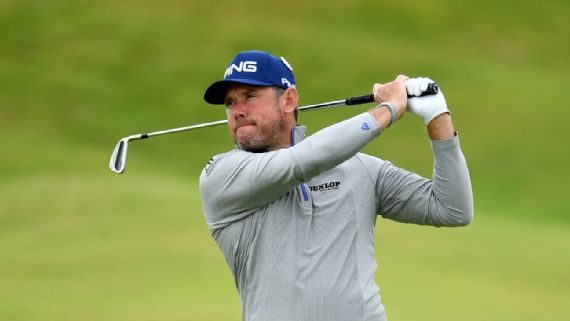 Lee Westwood may have been firing a warning shot or playing mind games as he talked about the prospects of the U.S. and Europe in the Ryder Cup.

As he prepared to make his 10th appearance in the competition at Hazeltine next week, he made it clear that he has not been entirely convinced by the selection and leadership of Davis Love III or vice-captain Tiger Woods.

“His [Love’s] captaincy at Chicago was great for a couple of days,” Westwood said, remembering how Love presided over his country’s rise and fall in 2012 at Medinah, when the team let a 10-6 lead slip in the singles on the final day.

“I don’t know if something went wrong on the Sunday, or the team didn’t play very well for some reason, but that will be in the back of their minds.”

Love was not the favorite to be named America’s captain before his role was confirmed, with Fred Couples fancied by many and the disunity that was obvious under Tom Watson’s leadership at Gleneagles in 2014 still front of mind.

Once the bulk of his team was named, however, the narrative quickly moved on. In terms of the balance of power, the Europeans, for whom the possibility of a rookie horror show has been raised, have been asked a lot by their local media about tackling what has been seen as a strong opposition line up.

Love can boast players such as Jordan Spieth, Phil Mickelson and Dustin Johnson and, while Europe has Rory McIlroy and Westwood, captain Darren Clarke will be heading to Minnesota with six players making their debuts.

Westwood will be one of the experienced players in the team on hand to help rookies such as Chris Wood, Thomas Pieters and Matt Fitzpatrick adjust to the unique Ryder Cup atmosphere, but he hinted the U.S. team might have some teething troubles of its own.

“There seem to have been issues about team spirit and chemistry,” Westwood told ESPN. “Love’s has not picked Bubba Watson and I don’t know what that does for team spirit — he was first outside the points qualification and is No.7 in the world.

“The captain is obviously building them up a lot and making a few interesting decisions. They have have got a strong side and probably are favorites but they haven’t won it for a while and they are playing in front of a home crowd — there is a lot of pressure on them.

“That is going to keep building in the next week or so and by the time the Ryder Cup comes around it is going to be pretty intense for them, the week in Minnesota.

“They have got this task force in place, they are obviously being very serious and doing as much as they can to win the Cup back. There is a lot of pressure on them.”

The role of the teams’ vice-captains — one which many thought Westwood would have been given for Europe had Clarke not made him one of his three picks — is to help players deal with outside influences and issues, keep the team in top form.

But having Woods, a seven-time player with a 13-17-3 record, on the U.S. roster will bring extra attention, even if Love has claimed the 14-time major winner’s strength will be in his contribution to strategy.

“I don’t know what impact there will be from having Tiger around,” Westwood said. “They [the U.S. team] have always struggled to find a partner for Tiger that’s been successful.

“He could have an adverse effect in the team room. People have always seemed to try to do too much when they have partnered him. It might be different if he’s one of the vice-captains — you don’t know.”

Dustin Johnson Surges at the Tour Championship
Scroll to top