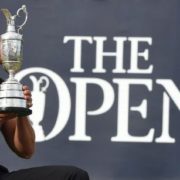 TROON, Scotland — Henrik Stenson kept hitting the best shots of his life, one after another, because there was no other way to beat Phil Mickelson in an Open showdown that ranked among the best in golf.

Stenson shot an 8-under 63 on Sunday to finish the tournament at 20-under and claim his first major championship. He won Sunday’s matchup with Mickelson by 2 strokes and the Claret Jug by 3 over the American.

Stenson’s final stroke of this major masterpiece was a 20-foot birdie putt on the 18th hole at Royal Troon that tumbled into the cup on the final turn. His 63 matched Johnny Miller for the lowest closing round by a major champion.

“I didn’t know until they told me in the recorder’s hut,” Stenson said when asked if he knew that last putt was for 63.

Both Stenson and Mickelson played stellar golf, combining for an eagle, 14 birdies and two bogeys in the final pairing.

“Thank you very much for a great fight,” Stenson told Mickelson as he accepted the Claret Jug.

Stenson ended his winner’s speech on the 18th green by dedicating the victory to a close friend who died of cancer the day before The Open started.

“I feel like he has been with me all week. Mike, this one is for you,” said an emotional Stenson as he raised the Claret Jug one more time and kissed it.

Mike Gerbich was a pal of the Stenson and his wife Emma when they lived in Dubai. Gerbich and Henrik Stenson used to play golf together.

Stenson delivered a crushing blow to Mickelson’s chances of capturing a sixth major championship by making a 50-foot birdie putt from off the green at No. 15 that gave him a 2-shot lead with three to play. It was the first time all day the final group had been separated by more than 1 stroke.

The 40-year-old Stenson started walking when the putt was halfway there, stopping to pump his fist, rare emotion for the Swede with ice-blue eyes.

Mickelson narrowly missed an eagle putt on the 16th hole, and Stenson kept his 2-shot lead with an up-and-down for birdie from the deep rough.

“You know he’s not going to back down and he’s going to try to make birdies on every hole,” Stenson said. “So I just tried to do the same, and just delighted to come out on top and managed to win this trophy.”

Mickelson led only once, a two-shot swing on the opening hole. They were tied with five holes to play until Stenson made an 18-foot birdie on the par-3 14th and then buried Lefty with a putt that defined his moment as a major champion.

J.B. Holmes finished third. He was 14 shots behind.

“Those guys are playing a different golf course than everyone else,” Holmes said.

Stenson’s previous best finish in a major was a tie for second at the 2013 Open at Muirfield, which Mickelson won for his most recent major victory.

He gave Sweden a long-awaited major in men’s golf, 19 years after Jesper Parnevik lost a 54-hole lead at Royal Troon. Stenson said Parnevik sent him a message that said, “Go out and finish what I didn’t manage to finish.”

“I’m really proud to have done that, and it’s going to be massive for golf in Sweden with this win,” Stenson said.

“It’s disappointing to come in second, but I’m happy for Henrik,” Mickelson said. “I’ve always thought that he is one of the best ball strikers in the game and that major championships are perfectly suited for him. I knew that he would ultimately come through and win. I’m happy that he did. I’m disappointed that it was at my expense.”

For Mickelson, it’s an 11th runner-up finish at a major in his career. Only Jack Nicklaus, with 19, has more second-place results.

“It’s probably the best I’ve played and not won,” Mickelson said. “That’s probably why it’s disappointing in that I don’t have a point where I can look back and say, ‘I should have done that’ or ‘Had I only done this.’ I played a bogey-free round of 65 on the final round of a major. Usually that’s good enough to do it. And I got beat. I got beat by 10 birdies.” 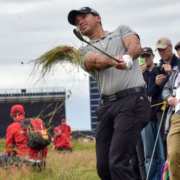 Exciting week in golf the 145th British Open is here!

Dustin Johnson and Jason Day enter the British Open as co-favorites on the betting lines at the sportsbooks in the third major event of 2016.

Known for a long while as one of the best golfers in the world never to have won a major, Dustin Johnson finally broke through with a 4-under-par performance in the U.S. Open to win the event. Johnson carried that momentum into another win at the WGC Bridgestone Invitational, making him the hottest golfer on the tour coming into the British Open. In 15 tournaments this season, Johnson has ten Top 10 finishes.

Day has been extremely consistent in 2016, picking up seven top-10 finishes in his last nine events. Day has three wins over that stretch including his win in The Players Championship, and he enters this tournament with three top-five finishes in his last five appearances. Unlike some of the boom-or-bust options on the board, Day is a pretty reliable bet to still be in the hunt come Sunday.

McIlroy won this event in 2014 for the third major title of his career. McIlroy missed the cut at the U.S. Open, but before that had seemed to be in solid form with five straight top-12 finishes, including three fourth-place finishes in his last five tournaments. As a Northern Ireland native, McIlroy has a strong following with the British Open being played in the United Kingdom.