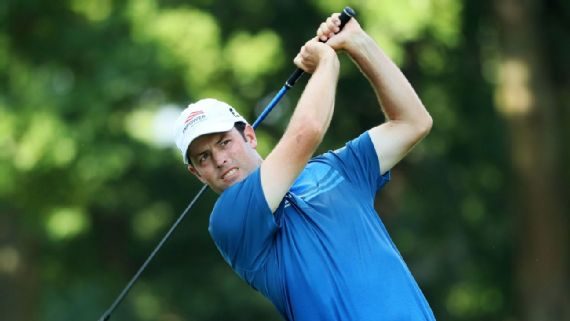 SPRINGFIELD, N.J. — Fifteen days after he played one of the most flawless rounds of golf in his career, Phil Mickelson stood on the first tee Friday afternoon at Baltusrol Golf Club and proceeded to pound his drive onto one of the few New Jersey streets without traffic.

Hours later, Robert Streb, who hasn’t finished in the top 10 in a year, whose name doesn’t exactly evoke fear when it appears on a leaderboard, became the latest player to shoot 63 in a major championship. And in an interesting bit of trivia, Streb became the fourth to do so here.

Mickelson barely made the cut; Streb is tied for the lead through two rounds of the PGA Championship.

Sometimes, golf is impossible to explain, and two days at Baltusrol shows why it is exceedingly difficult to handicap.

Streb joined Jimmy Walker atop the leaderboard at 9 under par, with Argentina’s Emiliano Grillo 2 shots back along with defending champion Jason Day, who had a stretch of eight holes with seven birdies.

Meanwhile, Rory McIlroy, who has won this tournament twice and was considered a pretournament favorite, butchered the relatively benign 18th hole to miss the cut. This is the second major championship this year in which he has not qualified for the final 36 holes.

“I think if you had given anyone else in this field my tee shots this week, they would have been up near the top of the leaderboard,” McIlroy said. “It just shows you how bad I was around the greens. I’ve hit the ball really well and I’m walking away not playing the weekend.

“It’s really disheartening. I need to go back to the drawing board and see where we go from here.”

Then there’s 29-year-old Streb, a one-time PGA Tour winner who missed the cut in the previous three major championships this year and who hasn’t finished better than a tie for 20th in his previous 17 starts.

Streb opened the tournament with a 68 on Thursday. Then, beginning on the back nine for the second round, he played nicely, shooting a 33 that included four birdies and a bogey. But he also birdied the second hole, the sixth and the seventh. And all of a sudden, when he knocked in a 20-footer at the ninth, it added up to 63.

“Happy to join the club that seems to be ever-growing,” Streb said.

Going into The Open at Royal Troon, the feat of a single-round 63 at a major had been accomplished 27 times by 25 players.

Now it has been done 30 times by 28 players, with Open champion Henrik Stenson doing it in the final round at Royal Troon when he outplayed Mickelson in their epic duel.

Stenson has maintained his momentum after capturing the Claret Jug, posting consecutive 67s at Baltusrol to be in fifth place, 3 strokes back of the leaders.

“Of course, confidence level is always going to go up when you manage to accomplish what I did at Troon,” the Swede said. “You’re going to feel a bit more confident, and trusting yourself more that you can do it again if you’ve done it once. I guess that’s natural and I do feel that.

“I can’t guarantee that it’s going to happen again, if I’m in a similar situation. But at least you’ve got the belief that you can do it.”

None of the 20 PGA of America club professionals in the field made the cut, which came at 146, 2 over par. So if McIlroy needs a putting lesson, there are plenty of club pros around who have the time to offer some help.

While McIlroy will have to watch the weekend on television, one who will be spending less time doing commentary is Rich Beem. The 2002 PGA champion has a full-time gig with Sky Sports in the U.K., working some 25 events a year.

He had not played a competitive round of golf on a major tour since last year’s PGA Championship at Whistling Straits, where he missed the cut. And due to tendinitis in his right shoulder, Beem, 46, has not played much golf this year. He started to play and practice again only in the past month.

A lot of things seem messed up at the moment.

Three 63s in majors in a matter of 15 days. No. 2 Dustin Johnson, perhaps the hottest player in golf, and McIlroy, missing the cut. No. 1 Day, ill once again on the eve of a big tournament and getting in but one practice round, shooting 68-65 to be in contention. Jordan Spieth with a lengthy rule issue.

And then there’s Mickelson, who won the PGA here in 2005 and came oh-so-close to a sixth major title two weeks at Royal Troon. Over four days in Scotland, Mickelson made just four bogeys, twice going bogey-free for entire rounds.

On Friday, he went 3-over-par on one hole, and it was fortunate it wasn’t worse. His first tee shot found the road, his re-tee nearly went just as far off the fairway to the other side and was fortunate to be in play. From there, he knocked another wayward shot, chipped short of the green, then got-up-and-down for a triple-bogey 7.

“I think in the history of the PGA Championship, that’s the worst start of anyone’s round,” Mickelson said. “I’d have to look that up.”

Actually, about 30 minutes after Mickelson, Nicolas Colsaerts made an 8 at the first hole. But it wasn’t his first hole of the day.

“It was probably after I did it,” Mickelson quipped. “So I had it for a while.”

There is that. Which is strange, yet seemingly normal in the midst of all the other absurdities.

PGA of America gambled at Baltusrol — and lost
Scroll to top