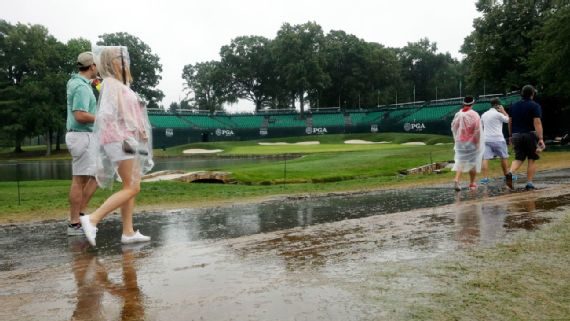 SPRINGFIELD, N.J. — Here’s the final tally from Saturday at the PGA Championship: A total of 37 players finished the third round; 39 others teed off without finishing; and 10 never even started.

That was the result of a weather suspension which began at 2:14 p.m. local time and never ended, as heavy rain pelted Baltusrol Golf Club while thunder and lightning punctuated the afternoon sky.

This weather was always in the forecast, though it’s debatable whether the radar showed this much rain coming down for this long. Kerry Haigh, the PGA of America’s Chief Championships Officer, explained that the forecast was similar to the first two tournament days, which included just one short delay. But they knew the storms were coming. Everyone knew they were coming, in some shape or form.

For an organizing body running a golf tournament with impending weather, there are two potential options: The first is to move up tee times and try to get as much golf played as possible before any suspension of play. The second is to try to get lucky. 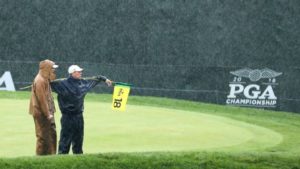 In Saturday’s scenario, the PGA of America chose the second option.

“It’s a major championship, and we certainly try and look at starting from one tee wherever we can,” Haigh said. “Unfortunately, the weather didn’t help us.”

It’s all hindsight now, but simple math shows us that if officials had chosen the first option, then the entire third round could have been completed — or at least close to it — before the heavy rain began.

There were 86 players who made the cut this week, a massive number considering the cut line was top 70 and ties. Massive, but hardly untenable in this situation.

The first course of action would’ve been to play in groups of three off split tees.

Based on the numbers, there’d be 26 threesomes and four twosomes. That’s a total of 30 groups, which means 15 off the first tee and the other 15 off the 10th tee, just as players were sent out during the first two rounds. Haigh admitted the prospect of a two-tee start was “not significantly” discussed on Friday evening.

With sunrise at 5:52 a.m., the first tee time on Saturday easily could’ve been 7 a.m., which would’ve given the opening groups plenty of time for preparations prior to the round.

Fifteen groups teeing off each tee in 10-minute intervals would mean the final group teed off at 9:20 a.m. Figuring five-hour rounds, the final groups of the third round would’ve been done by 2:20 p.m.

All of which would’ve worked just about perfectly; The weather suspension began at exactly 2:14 p.m.

Now, if you want to argue that threesomes playing in a major would have taken longer than five hours, or that the crossover between the two tees would’ve caused a bit of a logjam, those are valid arguments. Maybe it would’ve taken longer to finish; maybe that logjam would’ve impacted the pace of play.

But this point is inarguable: No matter what, a lot more golf would have been played if the PGA of America had taken this option rather than the one they did.

They tried to get lucky — and failed.

The plan now is for a long Sunday, during which everything will have to go perfectly to have a champion crowned before sundown.

The third round will resume at 7 a.m., while the final round begins at 8:40 a.m., meaning there will be a confusing crossover on the leaderboard between which players are playing which round.

The final twosome is scheduled to start the final round at 3:25 p.m. Sunday, which means that, if all goes according to plan — if the course is playable first thing in the morning and if there are no further delays — we just might have a champion tapping in his final putt in the gloaming.

“Our primary aim is to try and finish (Sunday) evening,” Haigh explained.

It won’t be so easy. There are more thunderstorms in the forecast, which means there’s a strong possibility of a Monday finish.

It could have, potentially, been avoided. Instead, the PGA of America gambled on getting lucky and lost.

Oh, and here’s the real kicker: The forecast calls for thunderstorms here on Monday, too.