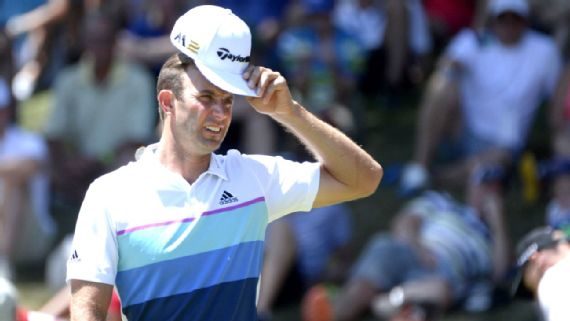 The U.S. Open champion had to make up a lot of ground to do it.

Johnson had a double bogey and two bogeys on his first holes Friday in windy conditions at sun-baked Glen Abbey. He rebounded with six birdies and had a late bogey in a 1-under 71.

“I really don’t know what happened the first four holes,” Johnson said. “Just got off to a bad start. Hit it in a couple awkward spots. Made some bad bogeys, but fought back and turned it around and felt like I played really nicely from 14 on in.”

Johnson played in the morning after eagling the par-5 18th late Thursday afternoon for a 66.

List also shot a 71, birdieing the par-5 16th and 18th after making three bogeys in a four-hole stretch early on the back nine.

Du Toit made the turn tied for the lead at 7 under, then had a triple-bogey 8 on No. 2 and a bogey on No. 5. The Sun Devils senior birdied the next three holes and closed with a par.

“Taking an 8 always hurts, but I just kind of stayed patient,” said du Toit, from Kimberley, British Columbia. “The putter heated up at the right time, and it was all good. Nothing but good things to say.”

Rahm is making his fourth start since turning pro after the U.S. Open. The Spaniard eagled the 16th hole.

“It’s so cool. It’s a great feeling,” Rahm said about du Toit. “Last time we played together and last time we were both on the leaderboard, it was still a college event. He’s still in college. But to see it like that, it’s a great feeling. I have got to say, him shooting low yesterday did motivate me a lot to do a good round.”

Kraft closed with a bogey.

“I played pretty solid. I didn’t make many putts,” Kraft said. “Felt like I gave four shots away there at the end with a double on 14 and then a bogey on 18.”

Top-ranked defending champion Jason Day was 1 over, following his opening 69 with a 76.

Pat Fletcher, born in England, was the last Canadian winner in 1954 at Point Grey in Vancouver, British Columbia. Carl Keffer is the only Canadian-born champion, winning in 1909 and 1914. Albert Murray, a Canadian also born in England, won in 1908 and 1913.

Canadian Olympic players Graham De Laet and David Hearn missed the cut. DeLaet shot 77-72 and Hearn had rounds of 74 and 75.

“It’s obviously disappointing but it’s another golf tournament, and I’m able to kind of get over it a little bit easier now than I used to be probably,” said DeLaet, who will represent Canada along with David Hearn in the Rio Olympics. “Obviously, I wanted to play well here this week, but there’s more tournaments to play.”