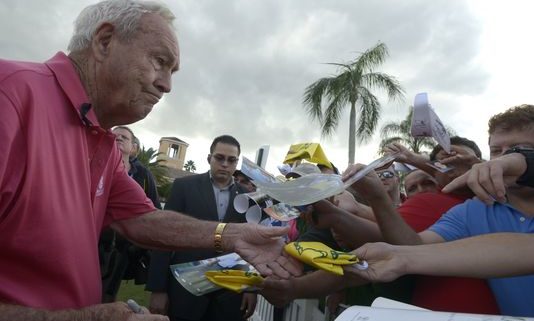 Arnold Palmer: ‘The King’ of golf dies at 87

Before accepting the Presidential Medal of Freedomin 2004, Arnold Palmer shared a few laughs with President George W. Bush and gave the commander in chief a few golf tips in the East Room of the White House.

Five years later, when honored with the Congressional Gold Medal, Palmer, who again offered golf tips to some of the most important politicians in the country, jokingly thanked the House and the Senate for being able to agree on something.

After receiving the highest civilian awards given in the United States, Palmer went outside each day, at 1600 Pennsylvania Avenue and the U.S. Capitol, and signed autographs for hundreds of people.

That was Palmer, a man who connected with the masses, who related to kids, the hourly wage employee, the CEO — and Presidents.

Palmer, who died Sunday in Pittsburgh at age 87, according to a statement from the USGA, was the accessible common man who would become the King and lead his own army. Along the way he became one of the sport’s best players and a successful businessman, philanthropist, trailblazing advertising spokesman, talented golf course designer and experienced aviator.

While his approach on the course was not a model of aesthetics — the whirlybird followthrough, the pigeon-toed putting stance — it worked for him. With thick forearms and a thin waist, Palmer had an aggressive risk-reward approach to golf that made for compelling theater. He hit the ball with authority and for distance and ushered in an aggressive, hitch-up-your-trousers, go-for-broke, in-your-face power game rarely seen in the often stoic and staid sport.

Palmer, part of the alluring “Big Three,” with Jack Nicklaus and Gary Player, won 62 titles on the PGA Tour, his last coming in the 1973 Bob Hope Desert Classic. Among those victories were four at the Masters, two at the British Open and one at the U.S. Open. He finished second in the U.S. Open four times, was runner-up three times in the PGA Championship, the only major that eluded him, and was inducted into the World Golf Hall of Fame in 1974.

Palmer became one of the best known sports figures and, at 5-10, 175, a telegenic golfer who burst out of black-and-white television sets across the country in the late 1950s and into the 1960s and took the game to the masses.

“Arnold meant everything to golf. Are you kidding me?” Tiger Woods said. “I mean, without his charisma, without his personality in conjunction with TV — it was just the perfect symbiotic growth. You finally had someone who had this charisma, and they’re capturing it on TV for the very first time.

“Everyone got hooked to the game of golf via TV because of Arnold.”

He received virtually every national award in golf and was the “Athlete of the Decade” for the 1960s in a national Associated Press poll. Palmer, who helped found the Golf Channel decades later, also helped usher in the Champions Tour, where he won 10 times, including five majors.

In this Sept. 9, 1960, photo, President Dwight Eisenhower enjoys a laugh with Arnold Palmer before they played a round of golf together in a foursome at the Gettysburg (Pa.) Country Club. (Photo: Paul Vathis, AP)

He was a magnetic star who attracted legions of fans who had never played golf as the television boon exploded across the land.

Dwight Eisenhower, who loved golf, was one of Palmer’s best friends. Richard Nixonasked Palmer about the Vietnam War. Palmer played golf with both Presidents Bush.

Eisenhower painted Palmer’s picture — as did Norman Rockwell. There is a drink named in Palmer’s honor, as well as an airport, a golf tournament, hospitals, streets, charity initiatives and 19th-hole grill rooms.

And from start to finish, Palmer signed as many autographs, posed for as many pictures, chatted with as many fans in the galleries as any golfer who hit a golf ball.

“There are two things that made golf appealing to the average man — Arnold Palmer and the invention of the mulligan,” actor/comedian and good friend Bob Hope once said.

Palmer was a folk hero with a driver in his hand and a handshake after the round. From 2007 through 2015, he served as the honorary starter for the Masters, creating one of the best moments of the tournament every year on Thursday morning.

“Arnold Palmer was the everyday man’s hero,” Nicklaus said. “From the modest upbringing, Arnold embodied the hard-working strength of America.”

Palmer was the oldest of four children born to Deacon and Doris Palmer. He received his first set of golf clubs from his father, who worked at Latrobe Country Club from 1921 until his death in 1976. Growing up near the sixth tee of the club, Palmer learned the grip and the swing from his father, as well as manners, empathy, integrity and respect.

Palmer worked nearly every job at the club before heading to Wake Forest University, where he became one of the top collegiate players. But when his close friend, Bud Worsham, was killed in a car accident, Palmer quit school and enlisted for a three-year hitch in the U.S. Coast Guard.

While stationed in Cleveland, his passion for golf was rekindled. Then, while working as a paint salesman, Palmer quickly got his game back in order and won the 1954 U.S. Amateur Championship. On Nov. 18, 1954, at 25, he turned pro and signed a contract with Wilson Sporting Goods.

His greatest stretch of golf began in 1960 and lasted four years, with Palmer winning six major championships and 29 titles on the PGA Tour. It was in 1960, at the Masters in Augusta, Ga., that a local newspaper coined the phrase “Arnie’s Army,” when soldiers from nearby Camp Gordon followed Palmer. Soon, non-uniformed fans across the land enlisted.

Palmer’s defining moment, one that embedded the word “charge” into the minds of his adoring fans, came in the 1960 U.S. Open at Cherry Hills. Palmer had won the Masters two months earlier, with birdies on the final two holes to edge Ken Venturi by one shot. But Palmer began the final round of the Open seven strokes and 14 players behind and was told by Bob Drum of The Pittsburgh Press that he was too far behind to win.

Arnold Palmer chats with his wife, Winnie, and father, “Deke,” at the 1960 British Open at St. Andrews, Scotland, which he won. (Photo: Associated Press)

Angered by the remark, Palmer drove the first green 346 yards away and made the first of four consecutive birdies. He added birdies on the sixth and seventh and shot a final-round 65 to complete the comeback victory.

A month later, Palmer made a pilgrimage to St. Andrews for the British Open, and his presence helped salvage the game’s oldest championship and elevated it back among the game’s best tournaments.

In all, Palmer won eight times in 1960, the year he signed with pioneering sports agent Mark McCormack and quickly became a marketing giant for products ranging from golf equipment to jackets and slacks to automobile oil and rental cars. Palmer became the first professional golfer to earn $1 million for his career. Even into his 80s he was pulling in an estimated $20 million per year.

“Arnold was the epitome of a superstar,” fellow Hall of Famer Raymond Floyd said. “He set the standard for how superstars in every sport ought to be, in the way he has always signed autographs, in the way he has always made time for everyone. On the golf course, all I ever saw was a mass of people. He was able to focus in on everyone in the gallery individually. It wasn’t fake.

“And man, could he play the game.”

Giving back through charities

But as dramatic as his victories were, so, too, were Palmer’s losses in majors.

In 1961 he lost the Masters by one stroke when he made double-bogey on the 72nd hole after accepting premature congratulations from a friend to the right side of the 18th fairway.

Palmer lost three playoffs in the U.S. Open, to Nicklaus in 1962, Julius Boros in 1963 and Billy Casper in 1966, when Palmer blew a seven-shot lead with nine holes to play in regulation.

But the masses never deserted him. Palmer’s appeal was so large, so wide that he even gave origin to a beverage that soon became a hit across the land. One of his favorite drinks was a mixture of iced tea and lemonade.

It is now available in grocery stores and is simply called the Arnold Palmer.

“A guy came up to the bar, and he ordered an Arnold Palmer, and the barman knew what that drink was,” three-time major champion Padraig Harrington recalled about a visit to an Indian restaurant in Orlando in 2009. “Now that’s getting to another level. Think about it, you don’t go up there and order a Tiger Woods at the bar.

“When the guy ordered it, I thought, maybe you could do it in a golf club, but he’s ordered it in a random bar. And the guy, who probably wouldn’t know one end of a club from the other, knew what it was.”

In 1989, after Palmer played a major role in a fund-raising drive, the Arnold Palmer Hospital for Children & Women in Orlando opened. The first baby was born within hours after the ribbon cutting. Since, nearly 200,000 children have been born there.

In 2002, Arnie’s Army Battles Prostate Cancer was launched and more than 2,500 tournaments across the country sponsored by the organization have raised more than $3 million for prostate cancer research.

Arnold Palmer at a tournament in 1966, telegenic as ever (Photo: Malcolm Emmons, USA TODAY Sports)

Palmer also left his stamp on developing some 225 courses throughout the world.

“The game has given so much to Arnold Palmer,” Nicklaus said, “but he has given back so much more.”

This was evident when Palmer received the Congressional Gold Medal.

“Arnold, you’ve struck our hearts and our minds, and today your government, your fellow citizens are going to strike a gold medal for you.”

Added Senate Majority Leader Harry Reid: “Golf made you famous, but your tireless efforts to save lives, not your short game, will make you immortal.”

Born: Sept. 10, 1929, in the small industrial town of Latrobe in Western Pennsylvania, at the foothills of the Allegheny Mountains

Education: Wake Forest, on a golf scholarship, where he was the school’s first individual NCAA champion, in 1949, then the NCAA individual medalist again in 1950; first ACC champion in 1953

Hall of Fame: Inducted in 1974 into the World Golf Hall of Fame, among many halls of fame to honor him

Quote: “I have a tip that will take five strokes off anyone’s golf game. It’s called an eraser.” — Palmer