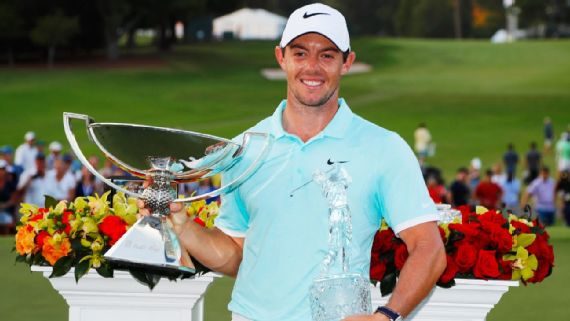 ATLANTA — Rory McIlroy holed two shots on the 16th hole at East Lake that made him a most unlikely FedEx Cup champion on Sunday.

The first one he didn’t even see go in.

Three shots behind with three holes to play at the Tour Championship, McIlroy holed a pitching wedge from 137 yards for eagle that gave him the spark he needed to close with a 6-under 64 and join a three-way playoff with the FedEx Cup title riding on the outcome.

“I knew I was right back in the golf tournament,” he said.

Four playoff holes later on the 16th, after Ryan Moore made a par putt from just outside 15 feet, McIlroy knocked in his 15-foot birdie putt to win two trophies that he desperately wanted — the Tour Championship and the FedEx Cup.

“Just to see that ball drop, and everything that’s come together for me this year … to pull it off was really special,” McIlroy said, his voice still hoarse from screaming over so many quality shots, so many clutch moments over the final two hours at East Lake.

McIlroy picked up $11.53 million in one day — the $10 million FedEx Cup bonus and $1.53 million for the Tour Championship, his second victory in three weeks that made him the first player to win four FedEx Cup playoff events.

His only hope was to win the Tour Championship and have Dustin Johnson finish worse than second alone. Johnson closed with a 73 and tied for sixth.

In its 10th year, the FedEx Cup never had a finish like this.

Moore, who might have done enough to earn that last captain’s pick for the Ryder Cup, missed an 8-foot birdie putt by the slimmest of margins on the par-5 18th hole in regulation for a 64. In the playoff, he holed a 10-foot birdie putt with McIlroy facing a 6-foot eagle putt for the victory. McIlroy missed.

Even on the final hole, Moore gave McIlroy everything he had. His chip over a ridge raced well past the hole, and it looked as though McIlroy would only have to two-putt for the victory. Instead, Moore holed another big putt.

“I just wanted to make him earn it for that much money at least,” Moore said. “I wanted him to make the putt. It was nice to get up and make it, but you give a great player like him that many opportunities, and he’s going to make one eventually.”

Chappell had a two-shot lead with two holes to play when he made bogey on the 17th hole — only his third of the week at East Lake — and Moore birdied it in the group ahead of him. Chappell was woefully short on a 20-foot birdie putt on the 18th for the win, and he was eliminated with a par on the first playoff hole when he made par.

Johnson surprisingly was never a factor and he hit too many errant shots on the front nine and never recovered. He still would have won the FedEx Cup had either Moore or Chappell won the tournament, which he said “would have been really cool.”

“It didn’t feel right because I didn’t win the Tour Championship,” Johnson said. “That’s why I was here to win. I knew I controlled my own destiny.”

Johnson was second in the FedEx Cup and received a $3 million bonus.

McIlroy had control of this all along once he got into the playoff, except for one nervous moment.

He looked to put the perfect finish onto his big day when he hit out of the rough and over the water to 6 feet for an eagle putt on the par-5 18th in the first playoff hole. McIlroy was ready to pump his fist until his eagle putt slid by, and he removed his cap in disbelief.

Returning to the 18th, McIlroy missed an 18-foot birdie putt for the win. On the third extra hole, the par-3 15th over the water from 201 yards, McIlroy had to make a 7-foot par putt just to stay in the game.

Nothing was bigger than that birdie at the end. McIlroy stiffened his back, clutched both arms and shouted above the raucous cheers at East Lake.

“I’ve made it no secret that it’s one of the last things I feel like I had left on my golf CV, and I made it a big goal of mine to win it,” McIlroy said. “To be here and to win the FedEx Cup … to play the way I have in the last few weeks to get it done, is very special.”

It was the longest playoff in the 30-year history of the Tour Championship.

Moore had to wait two hours to see if his performance — a 66-64 weekend at East Lake — was worthy of a captain’s pick. Davis Love IIIwas to announce his decision during halftime of the Sunday night NFL game.

Chappell headed into a month off trying to figure out what he has to do to win. He was runner-up for the fourth time this season — twice to Jason Day, the No. 1 player in the world, and once to McIlroy. In those final rounds, Chappell’s scores were 67, 69, 69 and 66.