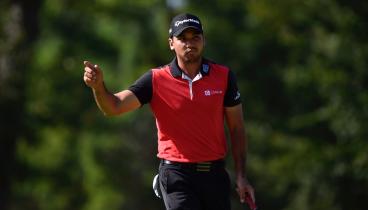 Nike has signed the best golfer in the world — again.

Sources tell ESPN.com that the world’s largest shoe and apparel company has signed Jason Day to wear its shoes and apparel, including its hat.

The move became possible when Nike suddenly announced last month that it was leaving the equipment business. Day, whose contract is up at the end of the year with TaylorMade-Adidas, is happy with his equipment, so he re-signed with TaylorMade. Those who have TaylorMade clubs usually get paired with Adidas shoes and apparel. But that has changed as Adidas, amidst continued consumer pressure in the golf business, is selling its golf businesses.

Terms of the deal were not disclosed, but one source said the No. 1 golfer in the world will get paid north of $10 million a year. Day’s agent Bud Martin of Wasserman did not return a call seeking comment.

Day might not be in the same marketing category as Tiger Woods or Rory McIlroy, but Nike can sell plenty of golf shirts by using Day as a model. Day is the model of consistency that Woods nor McIlroy have been. Not only did he win last year’s PGA Championship, but he has finished in the top 10 in six of the past eight majors.

With Woods out, and McIlroy’s game not up to par, Nike has had to push Brooks Koepka as its next name at retail, but he only has one PGA Tour win.

In Day, Nike hopes to find more relevance on Sunday of the majors. A Nike endorser hasn’t won a major in the past eight, the longest drought since 2003-04. And Tiger’s last PGA Tour came more than three years ago.

Nike agreed to shutter its golf equipment business after it finished fiscal 2016 with $706 million in revenue, its worst year since 2011. While it never achieved significant market share in the equipment business, its golf clothing business is a market leader and profitable.