July 18, 2016 – No Jordan Spieth, no Dustin Johnson, but the U.S. Olympic golf team still looks to be in good shape after its official announcement on Monday. Bubba Watson, Rickie Fowler, Patrick Reed and Matt Kuchar make up the men’s side, while Lexi Thompson, Stacy Lewis and Gerina Piller comprise the women’s representatives. 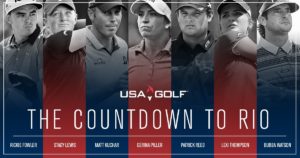 With four athletes qualified, the U.S. men reached the maximum quota allowed, while the women only had three Americans in the top 15 players in the world, qualifying just three of a possible four spots.

Watson and Fowler are the world’s No. 6 and No. 7 ranked golfers and qualified for the Olympics on merit alone. Reed, No. 14 in the world, and Kuchar, No. 17, replaced Spieth and Johnson after the pair pulled out earlier this month.

Had qualification extended to this week, it would have been Reed and Phil Mickelson headed to Rio – rather than Reed and Kuchar – after Mickelson’s second place finish at the 2016 Open Championship.

Watson won the Northern Trust Open back in February and is the lone Rio-bound American man with a tournament win this year. Between the four men though, they have eight top three and 27 top ten finishes.

Thompson and Lewis – currently ranked fourth and eighth in the world, respectively, have been firmly in position to qualify for all of 2016, but Piller’s status was less certain.

Piller’s world rank has fluctuated over the past few months and had she fallen outside of the top 15 players in the world, only two Americans would have played in the women’s tournament. When qualifying ended on July 11, Piller just snuck in with the No. 15 ranking in the world.

The United States is far from the only country hit by withdrawals from the men’s tournament. Just one of the top five players in the world – Henrik Stenson – will be playing in Rio this August. Like Spieth and Johnson, Australia’s Jason Day and Ireland’s Rory McIlroy, first and fourth in the world, respectively, have decided to forgo the Olympic proceedings.

Sweden’s Stenson is coming off of the biggest victory of his career this past weekend at the Open Championship. It is the first major tournament win for the 40-year-old.